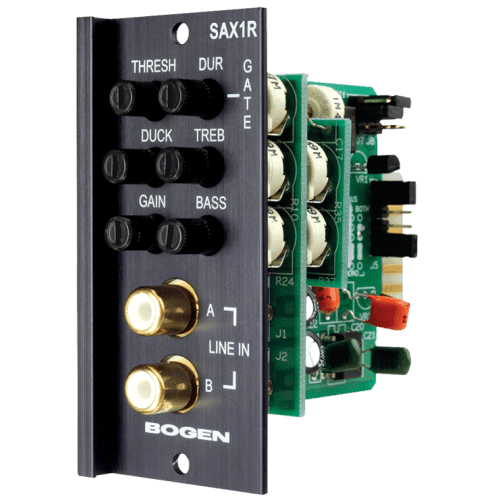 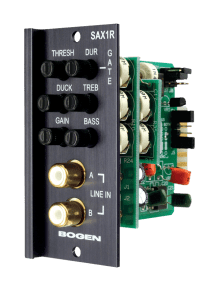 The SAX1R module is a stereo, high-impedance, unbalanced input module. The module has two RCA jacks for its input connectors. The module has a gain/trim control that will allow the gain to be adjusted from -20 dB to +6 dB relative to 0 dB nominal gain. It has the ability to mute lower priority modules and be muted by higher priority modules. The module is able to assume any of 4 priority levels. It also has a continuously variable ducking control that will enable attenuation of the input signal from a minimum of 10 dB to a maximum of 48 dB relative to the normal unmuted condition and a gradual fade back from mute when the mute or gate control is deactivated. The module has a VOX/gating circuit to control muting of lower priority modules and its internal gating circuit, with controls for threshold and duration. The module has bass and treble controls with cut or boost of 10 dB at 100 Hz and 10 kHz, respectively. The module’s outputs are independently assignable to each of two mixing buses and allow stereo sources to be summed and sent mono to either or both of two mixing buses.