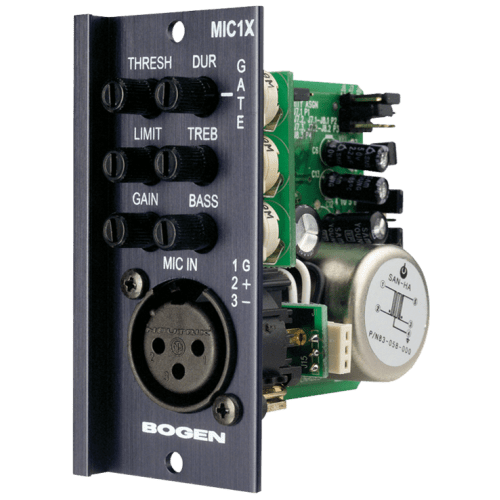 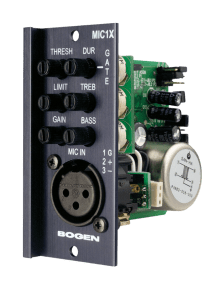 The MIC1X module has a transformer-isolated, balanced input with XLR connector. It has an interface with low-impedance dynamic microphones as well as an lso interface with electret condenser microphones and an internal 24V DC phantom power supply to provide the bias supply that is enabled by a PCB jumper. The module has a gain control that will allow the gain to be adjusted from 28 dB to 62 dB. It has the ability to mute lower priority modules and be muted by higher priority modules. The module should be able to assume any of 4 priority levels. The module has a VOX/gating circuit to control muting of lower priority modules and its internal gating circuit with controls for threshold and duration. It also has a built-in limiter, with a threshold control, to limit the maximum output level of the module. A front panel LED will indicate limiter activity. The module has bass and treble controls with cut or boost of 10 dB at 100 Hz and 10 kHz, respectively. The module’s output should be assignable to either or both of two mixing buses.